In the ancient world all things were divided down into their constituent elements (fire, air, earth, water) of which it was possible to observe their changes and transformations. A careful and detailed application and exploitation of the principles of the theory of the elements and the doctrine of humors allowed ancient man to predict, from heaven configurations, a whole series of additional information: from weather conditions to natural disasters, from the examination of the state of health of the individual to the general epidemiological state, from political changes to market trends, from the significant events in the life of the individual to the main events of the peoples. 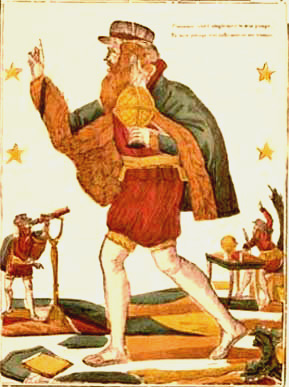 The luminous bodies in the sky are on one hand the wandering stars, the planets, the Sun and the Moon, and on the other hand the fixed stars, the constellations (or starry images), which are groups of stars of a particular nature which has been codified and handed down over thousands of years. Generating principles are the Sun, which produces the heat which is source of all things, and the Moon, which generates the primordial humidity present in the sublunary world (Earth). The steps that are generated in the movement of the Sun and Moon, with the participation of the qualities expressed by all the planets, the stars and all the other new lights appearing in the sky (comets, meteor swarms, meteors, novas), generate all variations of heat, damp, cold and dry, so they produce the change of weather conditions, the course of seasons in the year, the different constitutions of human beings and other living creatures of the animal, vegetable and mineral world. In a more general sense, the variations of these basic qualities, on Earth, produce the generation and change of the things existing in nature. The light of the celestial bodies, the variations of their light and the various ways in which the celestial bodies are placed, represent the link between the heavenly and the earthly world, between the level of form and that of matter. The action of light on the primordial matter in its fundamental gradations generates elements. Therefore, the amount of light is maximum in the fire, is a little more reduced in the air, in the water it decreases further, and it almost lacks in the earth. The elements, for their material nature, lack of heat and light that come only from the celestial spheres: the Sun, the first source of light, illuminates and warms the Moon first and then all the other planets which, according to their motions and their configurations, provoke in the sublunary matter the mixtures of basic qualities and the transformations of the elements, through their calorific action. Therefore the whole physical world is the result of the presence of sunlight into matter. The action of the light passes through the matter which is simpler than the four elements to get to the more complex one of the mineral, vegetable and animal bodies, in an infinite variety of combinations. The four elements are so directly linked with the seasons and with the body humors, as with all living things on Earth. All act according to the specific quality of their bright colour, which can be reduced to the range of colours of the visible planets. 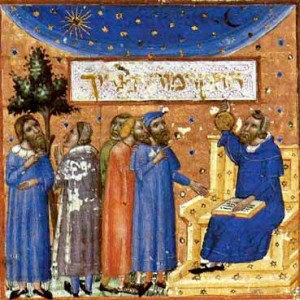 From the observation of the starry sphere we can make simple observations that are the origin of the astronomical views of the ancients which still determine to a large extent the way in which common sense and ordinary language relate to celestial phenomena. One of the first distinctions made ​​in antiquity is that between wandering stars (the Sun, the Moon and the planets of the solar system) and the stars defined as “not wandering” (fixed stars) since for their distance from the earth they seemed still to observation with the naked eye. Since very far-off times, the fixed stars, were considered as images, starry figures, asterisms, that is star clusters. They formed a fascinating representation of characters and mythological figures that was handed down, with variations in the names and references to certain myths, in the main great civilizations developed in every part of the Earth, from Mesopotamia to China, India, Greece within the Arab and Byzantine culture, in the Latin West, in Northern cultures, and so on.

In the following period, the zodiac originates as a belt interwoven with groups of stars. Originally there are twelve constellations in the Zodiac belt. These constellations, as images painted in the sky (zodia), have determined and unchangeable shape and size.

In the practice of agriculture there was the common notion of referring to the observation of certain stars like Sirius, Aldebaran, Antares. They are very brilliant stars that have a particular proximity to the declination of the celestial equator, so it is believed that certain very hot or very cold moments, that is of great thermal variation, were caused by these stars in the moment in which the Sun reached their declination. In particular, the moment of their heliacal rising or setting heralded a change of weather condition. For example, the Mars/Jupiter nature carrying great heat and dryness was traced back to the star Sirius. Thus, the heliacal setting of Aldebaran, the group of the Pleiades which is a star with a Mars/Venus nature and considered particularly damp, marked the beginning of winter and the rainy season (this phenomenon, in the middle latitudes, occurs every year around the middle of November).

The influence of the heavens.

Since its origins astrology has been based on an astronomical knowledge. The astronomical figures, which are mathematically determinable and observed over time, have been retraced to physical phenomena and events using a pre-eminently philosophical procedure. Astrology is not considered a science, and it has never been considered as such, but it refers to and uses the science methods, which are first of all mathematics, geometry and astronomy, and it works within these sciences through a mainly philosophical path. Undoubtedly, it can be said that astrology as such has a philosophical basis (rather than a religious one).

“The astrological art is the art of predicting events under the observation of the movements of the sky that is the mathematical comprehension of celestial phenomena. It is based on astronomy, astronomy in its turn on mathematics and geometry. Nevertheless it does not justify the legality and possibility of prediction, which comes only from philosophy“. (Giuseppe Bezza – preface to the Commentary of the first book of Tetrabiblos – Nuovi Orizzonti ed.).

There is an influence of the stars on all the things that happen on Earth and this influence is perceived in complex and recognizable forms. This influence comes from bodies that have light, but not just bodies that have light in itself, but bodies that, in their apparent motions (appearing to view with the naked eye or even with rudimentary tools), manifest an emanation of light that our perception receives. So the planets, the stars and all new light phenomena have influence: novas, bolides, igneous meteors, comets and so on, where, as we said, they are visible, perceivable at the sight of the human being. As regards the planets this occurs for planets with orbits close to the Sun, such as Mercury and Venus, but also Mars and Jupiter, up to Saturn, but not beyond. It is a reasoning related to sensory perception and light variations. So, it is a speech that wants to include what are the changes, alterations that a light cycle produces on life. Therefore, it concerns the observation of a “sensible” influence, an influence on the body nature. 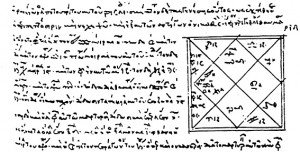 From the foundations and principles of ancient astrology a variety of astrological techniques have been developed, from its origins, and over time, but at present the substantial “trace” has been lost. They are coming to us only for the personal contribution of the few scholars who carry out research on the reasons that inspired astrology, on what are its applications and limits. It is the study of works that are not readily available or that require a wise work of translation – mainly from Latin, ancient Greek, Arabic – and a philological work before understanding the unity of conception.