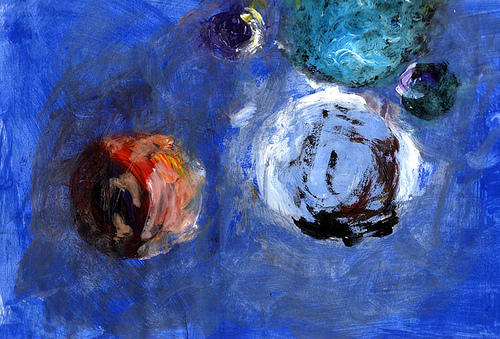 General meanings of the planets and luminaries

The Planets are celestial bodies that have a proper motion with respect to the fixed stars. In addition to the Sun and the Moon, the classical astrological doctrine considers the planets of the solar system those who were visible at that time: Mercury, Venus, Mars, Jupiter and Saturn. 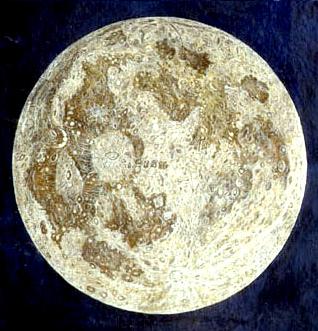 It has a humid nature, it is linked to the water, the mood of phlegm (immature blood). Its color is white, silver, cerulean; it is associated with silver, crystal, pearl, alabaster, quartz, selenite, white or transparent stones; but it is also associated with the changeable salty or bland taste; fields and plains, rivers, streams, wet places; melon, watermelon, cucumber, pomegranate, barley, vine, plants with short trunk; among the animals it is associated with: duck, heron, sheep, ox, camel, raven, elephant. 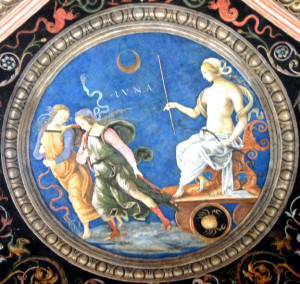 In its general meanings the Moon is associated with the female principle, the woman, the mother, the wife, the fertility, the conception and reproduction, the reflected light, the body, the nourishment, the growing up and decay of the body, the soul, the inner life, travelling, mobility, change, marriage, everything is wet, liquids, water, history, destiny.

The Lunar type is fantastic, with changeable moods, weak will, easily influenced by others, subject to fits of melancholy, but full of feeling, imagination and creativity.

In the body it indicates the left eye, view, stomach and the whole digestive system, breasts, the female reproductive organs, esophagus, spleen, lungs. In the soul qualities it represents shyness, mutability, inconstancy, dreaminess.

It has a dry nature, it is not associated with an item, a season or a particular mood. Its color is blue, light blue and mixed colors;

In its general meanings Mercury is associated to communication and messages, speaking and 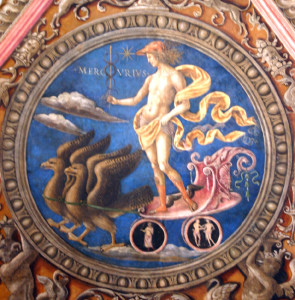 The Mercurial type is dynamic, lively, resourceful, versatile and ingenious, with intuitive, rapid, varied, above average intelligence, but in his own way also ambiguous, capable of fraud, theft and lies.

In the body it indicates tongue, hands, fingers, intestine, mouth, stomach, shoulders, joints, nerves and mental faculties. As for the soul qualities it represents the facility to communicate, the ability to speak, cunning, shrewdness, intelligence, nervousness, inconstancy, instability, the ability to lie.

It has a warm and humid nature (cold and humid), and it is related to the water element, the winter season, the mood of phlegm. 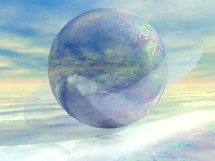 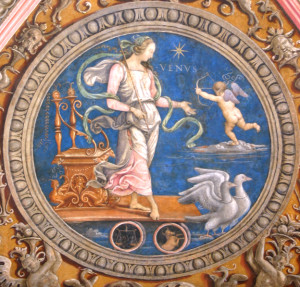 In its general meanings Venus is associated with the female principle, the mother, the wife, the younger sister, the daughter, and also with love, art, beauty, desire, pleasure, entertainment, luxury, marriage, love relationships, children, the age of adolescence.

The Venusian type is physically attractive, sweet, kind, gentle, sensitive to art and beauty, capable of tenderness and abandonment as of fiery passion and unconditional devotion in love, but subject to the emotional storms of the heart and prone to surrender to lust.

It has a warm-dry nature, and it is related to the fire element, the temperate mood of the yellow bile. Its color is yellow and gold;

it is associated to gold, chrysolite, hyacinth, the acrid, spicy, pungent taste; the sumptuous palaces; but also to wheat, cornt, orange, barley, rosemary, vine; among animals it is associated with lion, cock, eagle, hawk.

In its general meanings the Sun is associated with the male principle, the father, the husband, 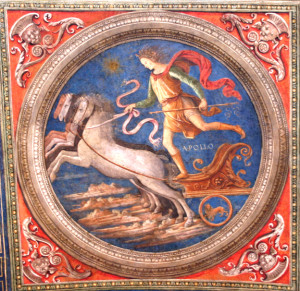 The Solar type is energetic, loyal, optimistic, confident, full of zeal and enthusiasm, able to exert a strong influence over others, apt to control, but not without pride.

In the body it indicates heart, the right eye, sight, brain, chest, nerves, head. As regards the soul qualities it indicates generosity, magnanimity, ambition, strong will, nobleness of soul and feelings, intelligence, the desire to appear, the contempt for what is petty and obscure.

It has a warm and dry nature, and it is related to the fire element, the summer season, the mood of the yellow bile. Its color is red and it is associated with iron, ruby, magnetite, 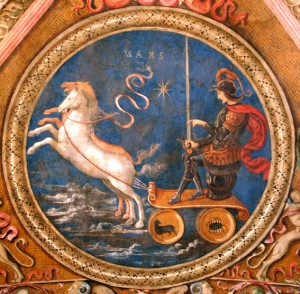 In its general meanings it is associated with strength, energy, action, violence, everything that happens suddenly, audacity, courage, war, weapons, but also to the middle brothers, everythings is dry and hard, and the age of youth.

The Martial type is strong, brave, impulsive, generous, able to fight with great energy, and to perform noble deeds, but he is subject to temper attacks, and he is violent, arrogant and cruel.

It has a warm and humid nature, it is related to the air element, the spring season, the mood of the blood. Its colors are white, 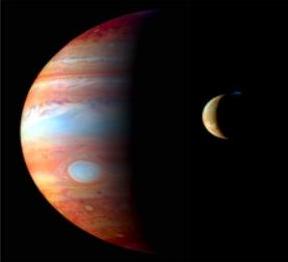 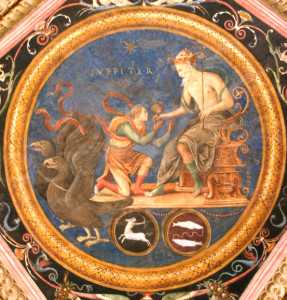 In its general meanings it is associated with justice, law, authority, fairness, religion, faith, kindness, children, the mature age preceding the old age.

The Jovial type is peaceful, benevolent, cheerful, lover of good food and the pleasures of the senses, but at the same time he is authoritative, majestic, lucky in the conquest of wealth, honors and material satisfactions of life, although he is sometimes inclined to self – indulgence and excessive euphoria.

In the body it indicates arteries, liver, lungs, thighs, and the viable seed. As regards the soul qualities Jupiter refers to generosity, loyalty, fidelity, kindness, happiness, common sense, the ability of discerment, religiousness.

It has a warm and dry nature, and it is related to the earth element, the autumn season, the mood of black bile. Its color is black 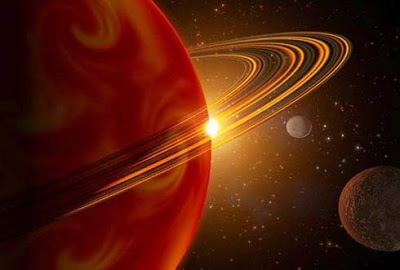 and is associated with lead and hard or dark stones; the acid taste, the underground places, cellars and sewers; plants with thick and hard bark, oak, medlar, rue; nocturnal animals or those living underground, snake, rat, camel.

In its general meanings it is associated with everything is slow, such as the delay, the old
age, the elderly, the father (along with the Sun), the older brothers. 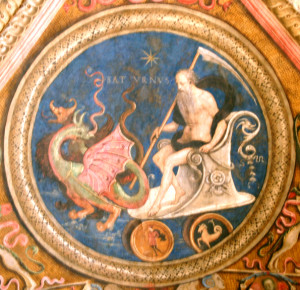 The Saturnine type is anxious, of a suspicious and closed nature, he tends to melancholy and sadness; his expressions are restrained and simple, he slowly gets the results of his hard work and commitment, he is unlucky and tends to isolate himself from active life. He can express an enlightened wisdom and great respect for moral principles, but also hardness, selfishness, grudge.

In the body it indicates bones, spleen, right ear, bladder, teeth, knees, legs, skin, nerves, hearing. As regards the soul qualities it refers to shyness, avarice and malice, the depth of the soul, detachment from active life up to retreat from the world.

The color of the planets 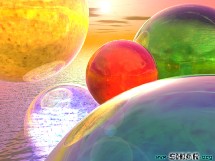 The observation of the color of the light is crucial. The quality of a celestial body depends on the color and nature of its light: after the luminaries, Venus is the brightest one and its light is thick and gauzy, moreover, it is the only planet that casts its shadow on Earth. The color of Venus is defined varied; Mercury has a yellow light; Saturn is livid yellow; Jupiter is white; Mars is red.   The star of the Sun and the Moon that reflects its the light on Earth, are the regulating luminous principles. They are white lights and the white light contains within itself all the colours of the rainbow spectrum.

The male principle is associated with the idea of activity and generation, the female one with the passive matter. So the two fertile and vital qualities were associated in the following way: the active and generative one, the heat, was associated with the male principle, while the passive and fertile one, the damp, with the female principle. Therefore the female stars have a prevailing wet nature and all the male stars are the remaining part in which the wet nature is absent or do not prevail. The Sun is the head of the male gender, since it is the hot planet, and the Moon is the head of the female gender, since it is the most humid. Mercury takes part in both genders: it becomes male with the male planets and female with the female planets, although it is considered inherently male.

The two malefic planets, in which prevail destructive qualities, were assigned in accordance with a balance principle: the cold Saturn is diurnal because the heat of the day reduces its excess of cold, the dry Mars is nocturnal because its excessive dryness is tempered by dampness of the night.

“Instead in India all the planets are called “graha”, which means” what grabs you, takes you and do not abandon you “. From this point of view all the planets are malefic because they have in their hands the destiny of man. This is common to India and partly

Sassanid Iran, where some religions developed, such as the Manichean religion (which Augustine belonged to before his conversion). These religions start from a dualistic concept of good and evil, but also move from a concept of extreme human dependence on fate, and the need to break free from fate. This bond between man and stars, as if they were bound by invisible ropes, is a physical bond. Towards the seventh and sixth century b.C.when the astronomical mathematics developed and astrology became very reliable, it was “discovered” that the stars have our destiny in their hands; This discovery went around the world. Even a religion such as Buddhism starts from these conceptions: the Buddhists are very wise, and originally, they
spread the astrological elements from Babylon to China, through India and Iran. So, this is the popular,

religious concept of the malefic planet because it disturbs and prevents man to get rid of his own destiny. We note that such views can be formed only if it is clear to most that destiny is knowable into its material components, through the positions of celestial
bodies. So we are far away from today, it is a very different world from ours. Instead, in the Hellenistic area, not simply the Greek area but around the Mediterranean basin, the planets are divided into benefic and malefic: the malefic planets are so called since they shorten life. When these planets pass the zenith, they arouse the elements that are contrary to human temperament: Saturn increases the cold and dry, Mars increases the dry and hot. According to these very schematic images, the transits of the planets on the horizon and the meridian arouse a mixture of elements and generate richness of the corresponding element, because life and matter are moved by this emanation. The temperament of Saturn and Mars does not match with the well-balanced temperament that favours life and, actually, they shorten and interrupt life; but in all other subjects, money, business, etc., they are not malefic: the term malefic affects only the body, the temperament and the length of life. It is clear that when we say “saturnine” indicating the melancholic character, we refer to the passage of a type of humour to a nature of the soul and to a typical classification; the melancholy, which lacks joy of living, which joins very little with others, and so on, is for us a “negative” kind we stigmatized in moral terms, and the same can be said for the choleric, combative, kind, who wants to rule over others, which corresponds with the nature of the other malefic; but these natures, from the point of view of life itself, are not absolutely privative. Saturn and Mars are not called malefic in relation to a stigmatization in moral terms, but only for a privative meaning on life and body (text of Giuseppe Bezza, from the lessons of the School of Classical Astrology of Milan). “